Is there a way to create waterfall charts? 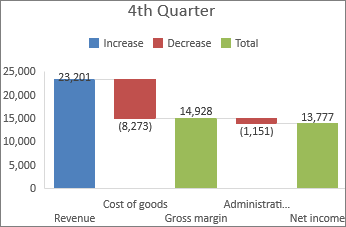 Note the ability to define the start value is important. Some other data viz can only support waterfall charts that start from zero, which is not great. Total end bar is important too to sum up the changes throughout the waterfall.

I have the same question and need to write out a full sentence because there is not a plus one option to upvote, only a heart and a minimum reply of 20+ characters, which I know I am beyond at this point but continuing to over state the importance of either having more emoticons or no character minimums for community posts.

Thanks for the feedback on how to make the community better / easier to use!

As for waterfall charts, we don’t currently support waterfall natively as a chart type. You can hack a stacked bar chart into a waterfall with some calculations though. I’ve roughly followed this guide on how to build a waterfall chart in an earlier version of Excel. You need to use some Lead / Lag functions to calculate the rise and fall but I found it doable.
If you need more explanation, I can circle back with the actual formulas for the columns in a bit.

Awesome and thanks! I love using waterfall charts for financial reports.

@willowness - another option would be to use the Sigma custom plugins for anything that’s not natively available in Sigma yet.

Steps to Create a Waterfall Chart in Sigma

This is assuming that the chart starts from 0, but I think that can be fixed with basic modifications to the formulas. I think that keeping the [Fall] column negative and then adding instead of subtracting will get you something that starts below zero.
The total column is a bit harder with this hack. The example waterfall that you gave is set up a bit differently than the example I gave, so we may be able to get totals in there. Let me play around a bit more.

this is great thank you so much!